Let’s get in the kitchen, pour ourselves a drink, and turn up the rebel music. We’re celebrating St Patrick’s Day vegan-style with this awesome Vegan Corned Beef!

For those of you who aren’t already familiar, corned beef & cabbage is a dish many Irish-Americans see as a quintessential component of their St Patrick’s Day traditions. During the weeks leading up to the feast day, we see this dish listed as a special at almost every Irish pub in Philly. So obviously, we had to make our own!

And make it we did…

Traditionally, corned beef is made by taking a fatty piece of beef and soaking it in a salty / vinnegar-y brine for several days. Because this brine often contains nitrites, the meat has a bright pink color for which it’s known. It’s then often glazed or rubbed with some fresh black pepper and baked low & slow. All this results in a tender, flavorful roast.

For our vegan corned beef, we kept a lot of the traditional methods and flavor but updated the ingredients. Once again, this recipe proves that one need not surrender one’s ethics in favor of one’s traditions. Aka, we’re gonna to show you how to make a totally kickass corned beef without anyone having to die.

How to Make Vegan Corned Beef

First, you’ll make your seitan. This seitan recipe is a bit different from ones we have posted in the past, thanks in part to the AMAZING Connie from Connie’s RAWsome Kitchen on YouTube. If you’re looking for some serious outside-the-box cooking inspiration, she’s totally your girl! Here’s what we learned from Connie that helped make this dish incredible: 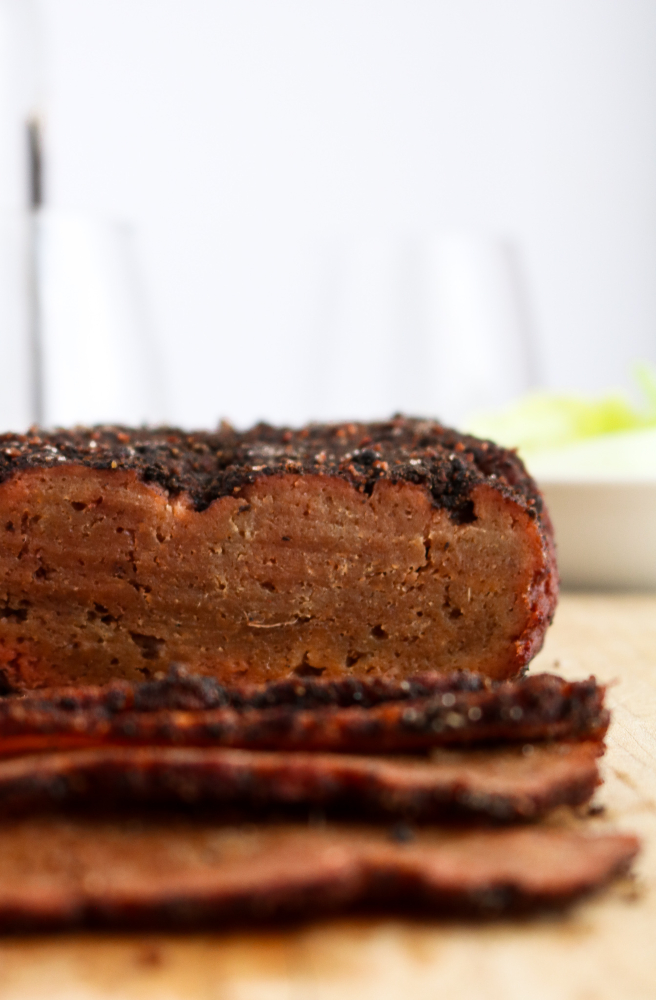 Connie also uses beets in many of her seitan recipes like we did in this seitan ham roast. That’s something I knew I definitely wanted to do for this corned beef. It’s the perfect way to add that iconic bright pink color to your vegan corned beef, sans the terrifying affects of nitrites. Seriously, Google search that stuff. It’s pretty frightening.

A Note for the Beet-Haters

But for my beet-haters out there, I feel it’s important to let you know that the end result does not at all taste like a beet. Trust me. I’m someone who has to hold her nose when cooking beets because the five-year-old picky eater in me just simply cannot. But I do know how healthy they are, so I’m super pumped I found a way to make them virtually unrecognizable but still attain some of the killer health benefits. Always a score with that one!

If you try this recipe for St Patrick’s Day or anytime, we would LOVE to know how it went and see your beautiful creations! You can rate the recipe and leave a comment below or tag us in your drool-worthy photos on Instagram. If you’re not already following, we’re @theplantpowercouple, with the ‘the’. 😉

We hope you enjoy this vegan corned beef recipe as much as we enjoyed creating it. Happy St Patrick’s Day!

Vegan Corned Beef that is as meaty and flavorful as any non-vegan version we've ever had but made from seitan in the slow-cooker! The gorgeous color comes from beet puree, a much healthier alternative that still kicks ass. 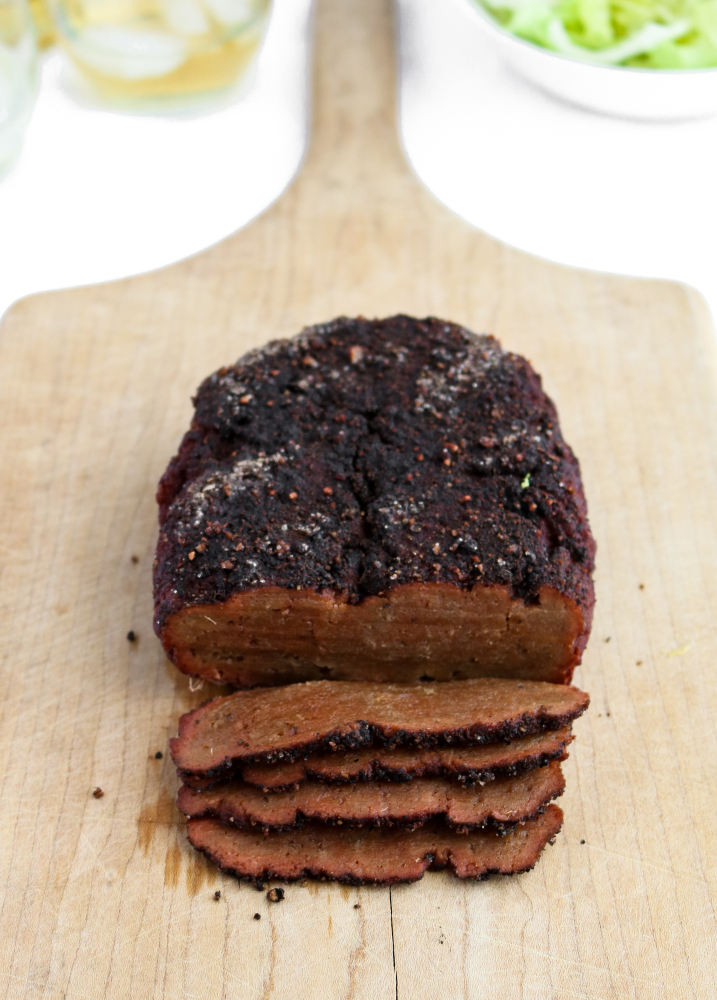 For the beet puree:
For the seitan:
For the rub:
For the brine:

*It's super important here to use coconut oil labeled "refined" and NOT one labeled "unrefined" or "virgin". Refined coconut oil has none of the coconut taste. Also be sure to melt your coconut oil carefully on the stove or microwave before you measure it.

Leftovers can be stored in the fridge for up to a week or frozen for up to 6 weeks!