These Vegan Cannoli Cones, infused with decadent white chocolate flavor, are a fantastically fun and delicious dairy-free dessert. Requiring only 8 ingredients (+ cones!) and super simple methods, they’re easy to make and can even be made ahead of time!

Wanna make a kickass vegan cannoli without all the fuss of making your own shells? Well, friend, your pastry prayers have been answered. We’re making Vegan Cannoli Cones!

Let me start by saying this post was originally meant to be an ice cream recipe.

Needless to say, the ice cream recipe was a bust. However, what we did notice about one particular batch of “failed” ice cream was that it was a dead-on match for cannoli filling. 😍

But of course, not wanting to go through the mess of figuring out how to make homemade cannoli shells or take yet another trip to the grocery store, we thought…

When we searched for this seductive combination on Pinterest, we learned that we were not the first to think this. In fact, the cannoli cone has already become something of a Pinterest miracle.

However, we hadn’t yet seen one made vegan.

And thus, out of complete and total necessity, this vegan cannoli cone recipe was born. 😁

It’s easier than you think!

The one great thing about these vegan cannoli cones (besides how awesome they taste) is they’re SO easy to make.

It’s one of those scenarios where you really only have to know how to use a blender or food processor in order to make this recipe. And maybe a spoon. The fancy-pants piping is 100% optional. 😉

But if you DO wanna get fancy with the piping, we highly recommend stocking your kitchen with a cake decorating kit like this. We are just starting to experiment with ours, and if this recipe is any indication, we will be using it a LOT!

Seven of the eight ingredients in the vegan cannoli filling are easy-to-find items you probably have in your kitchen right now, but there is one special *magic* ingredient, if you will. That ingredient, my friends, is cocoa butter. 😍 😍

For those of you who don’t yet know, cocoa butter is the fat extracted from the cocoa bean. It’s used to make everything from chocolate (HELLO, WE LOVE YOU ALREADY) to moisturizing skin and hair care products.

Cocoa butter is what adds all that decadent white chocolate flavor, luxurious texture, and also enables these vegan cannoli cones to hold their beautiful shape out of the fridge for several hours.

You may or may not find this stuff at your local grocery store, but it’s incredibly easy to purchase on Amazon: We went with the 1-pound bag of this brand here.

One pound is actually a lot more cocoa butter than I realized, but that’s okay. I’ve been finding new uses for it every day (like this white chocolate fudge + this blender latte!).

These vegan cannoli cones would be so perfect for a birthday party, date-night-in, or any kind of event, really.

You could even set up a little cannoli cone bar with various toppings like chocolate chips, cookie crumbles, strawberries…HOW COOL DOES THAT SOUND?!

Maybe my definition of cool is a little skewed, but still…I think that would be one awesome party.

So, the next time you’re throwing a party, doing date-night-in, or, hell, even on a random Thursday night when the week’s been rough and the pastry cravings hit you hard, give this vegan cannoli cone recipe a try!

And when you do, let us know ALL about it! Rate the recipe and leave a comment below or tag us in your adorable cannoli cone creations on Instagram. If you’re not already following along, we’re @theplantpowercouple, with the “the”.

And if you want to be sure you never miss a Plant Power Couple recipe, don’t forget to sign up for our email list.

We cannot wait to see the awesome things you do with this recipe. Enjoy, friends!

These Vegan Cannoli Cones, infused with decadent white chocolate flavor, are a fantastically fun and delicious dairy-free dessert. Requiring only 8 ingredients (+ cones!) and super simple methods, they’re easy to make and can even be made ahead of time! 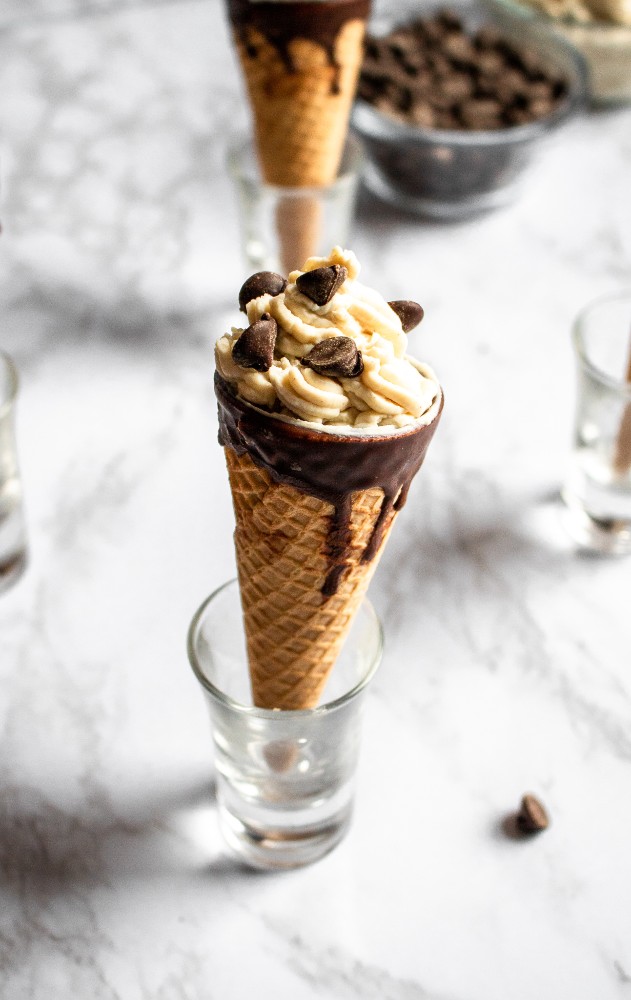 For the filling:
For the cones:

Pin this vegan dessert for later: