This cozy vegan beer cheese soup is nut-free and tastes like actual beer cheese soup, not just a healthy version of it! Surprisingly though, this vegan soup is dairy-free, easy to make gluten-free, and includes an oil-free option along with some sneaky hidden veggies.

With Oktoberfest on the horizon, this Vegan Beer Cheese Soup is definitely on our menu!

The idea for this vegan beer cheese soup came from our amazing friend Kat back in 2015 when that whole potato-carrot-cheese-sauce trend was first hitting it big on the interwebs.

Her suggestion to adapt that cheese sauce for a beer cheese soup totally inspired me! I mean CHEESE SAUCE I can eat with a SPOON?! Where do I sign up?

And side note, but can we talk about the soft pretzel bowls this vegan beer cheese soup is nestled in?

I am utterly convinced these vegan soft pretzel bowls were MADE to hold the cheesy glory of this vegan beer cheese soup.  They’re soul mates, damn. delicious. soul mates.  If they got married and invited me to their wedding, I would cry at the sheer beauty of two foods so meant-to-be.

This is the part where – when T reads this – he’ll look at me with a furrowed brow and go, “This is getting weird,” so I’ll just redirect myself now…

What is beer cheese soup?

“Beer soup” was actually a common breakfast dish in Europe during medieval times. This was usually cooked with egg yolk and served over bread…which seems weird. BUT, I guess we can surmise that technically, Vegan Beer Cheese Soup is fair game for breakfast.

How Our Beer Cheese Soup is Different

Our vegan beer cheese soup recipe is different because, well for one thing, it’s vegan which knocks out quite a few of the traditional ingredients (more on that below). For another thing, we could have easily made a more “traditional” style soup (in terms of process) using vegan butter and store-bought vegan cheese. I mean, this IS 2020 after all.

But, we opted to go a different route that leaves you with the same jaw-dropping flavor and creamy texture but includes hidden veggies you’d never know are there.

The taste and texture of this soup will legitimately blow you away. Even if you make the oil-free version, this soup is pure magic and tastes JUST like the traditional version (well, maybe not the medieval one..but I’m not sure I ever want to go there, haha!).

You may have tried potato-carrot cheese sauce before and thought, “Yea, it’s good but it’s not CHEESE.”

Here are a few reasons this recipe is different from others we’ve seen on the interwebs and the keys we’ve found to making the most cheese-like sauce out of vegetables because, trust me, I’ve been there.

For this Vegan Beer Cheese Soup, a good German beer is always preferable and always vegan-friendly thanks to the Reinheitsgebot (Bavarian/German Purity Law of 1516). However, many American brewers make great German copies. Just be sure to check the American version on barnivore.com to see if it’s vegan-friendly (more on why some beers aren’t vegan-friendly below).

What Beers You Should Avoid for Beer Cheese Soup:

Darker beers WILL change the color of the soup and have a heavier “beer taste”, so if you’re not after that, I’d stick to the pilsner or golden lager.

Avoid heavy stouts and porters for this vegan beer cheese soup as their flavors AND colors would tend to overwhelm instead of complement the dish. And NO fruit beers!

Is all beer vegan?

No, and that’s for a couple of reasons. Obviously, some beers will contain a substance that is not vegan – like honey or dairy products. That one is pretty easy to spot in the name or ingredients.

But there are some sneaky ways different alcohol isn’t vegan which usually have to do with the filtration/fining process (involving the use of fish bladders and weird things like that…I know, gross.)

Like I said, these can be sneaky though, so your best bet is to either email the company directly or check Barnivore.com. Barnivore is a resource with a collection of email responses people have gotten directly from companies themselves, stating whether or not their products are vegan-friendly.

Keep in mind: Brands change their practices over time and Barnivore is not a perfect resource, but it’s the best resource out there right now! And like T said above, you should be safe with a German beer thanks to Reinheitsgebot (Bavarian/German Purity Law of 1516).

For the veggies: It may be possible to substitute cauliflower for the potatoes, but I would stick with the rest of the veggies as-is.

For the mustard: If you only have one kind of mustard, feel free to just double up on the one you have. You can also sub miso paste!

For the oil: To make this soup oil-free, replace the oil with cashews or sunflower seeds. If you’re going to do this, boil the nuts/seeds with the veggies to soften them up a bit before blending. You can also sub a different oil, like sunflower oil or safflower oil. Refined coconut oil would work too, as long as you’re using one that has the word “refined” on the label. Otherwise, the soup will taste like coconut…not good.

For the beer: The alcohol does cook out of this recipe, but if you do not want to make it with the beer, I would just sub 1 cup water + 1 Tbsp bouillon powder + 1 Tbsp apple cider vinegar (or miso paste). That would account for the liquid and flavor pretty well! You can also make this soup with a non-alcoholic beer if that floats your boat. And to keep it gluten-free: Use your favorite gluten-free beer and skip the pretzel buns!

Step One: Boil your veggies.

First, you’ll add 6-8 cups of water to a large pot and bring the whole thing to a rolling boil. From there, you’ll add the potatoes, carrots, and onions and cook them until they’re nice and fork-tender.

Step Two: Blend all the ingredients together.

Next, turn your processor to high and blend for a full minute or two to make sure the oil is fully emulsified. That’s KEY! It will look shiny and LUSH.

If you want a chunkier soup, you don’t have to blend all the veg. (We do because we like a super creamy beer cheese soup.) If you want the chunkier texture, you can blend half the veggies and pour that half back in the pot to finish the last step.

Then, add the contents of the food processor to the pot once more and pour in the beer.

You’ll bring it to a boil and let it simmer uncovered until it reaches your desired consistency.

We HIGHLY recommend serving this vegan beer cheese soup in a soft pretzel bowl because IT’S A SOFT PRETZEL BOWL.

We used our homemade vegan pretzel bun recipe to make these bowls, but you can also check your local grocery store to see what kind of vegan-friendly options they offer. Vegan-friendly pretzels can be another hit-or-miss thing, so just be aware you’ll need to take a peek at the ingredients.

As for toppings, we love to sprinkle this vegan beer cheese soup with paprika (or SMOKED paprika) , some vegan bacon crumbles (like our coconut bacon salt), and fresh chives!

Also – Feel free to load this soup up with chopped broccoli, greens, whatever you dig!

Can you turn this soup into vegan beer cheese dip?

Yes! We offered this on a Super Bowl tray once, and it was a huge hit!

If you want to go this route: I would cut the water amount in half and to help thicken it up and add 1 Tbsp of tapioca starch to the food processor with the rest of the ingredients. Cook on low, uncovered, stirring often and scraping the bottom when you stir, until the mixture is a thick dip texture.

You can also skip the pretzel bowl and just make (or buy) mini pretzels to dip in it. So good!

Store this vegan beer cheese soup in an air-tight container in the fridge for up to 7 days. And keep in mind, the flavor intensifies as it sits (which, for us, is always a good thing).

You can reheat the soup in the microwave or over a low heat on the stove. Either way, make sure you stop to stir the soup often as you reheat.

Let the soup cool completely. Then, freeze soup leftovers in an air-tight container, leaving about an inch or so of room at the top for expansion. The vegan beer cheese soup should be good for at least 6 weeks stored like this.

To defrost, simply leave the soup on the counter for a few hours or in the fridge overnight until defrosted through. Then, just heat and eat!

My advice to you today is to make this soup.  You won’t regret it.

And when you DO make this soup (because I know you can’t live without it), be sure to rate it and leave a comment below. Or tag us in your photos on Instagram, so we can marvel at your glorious cheesy creations.  If you’re not already following along we’re @theplantpowercouple with the “the”.

And if you want to be sure you never miss a Plant Power Couple recipe, don’t forget to sign up for our email list!

We cannot wait to hear your soup stories. Happy cooking!

This cozy vegan beer cheese soup is nut-free and tastes like actual beer cheese soup, not just a healthy version of it! Surprisingly though, this cozy soup is dairy-free, easy to make gluten-free, and includes an oil-free option along with some sneaky hidden veggies. 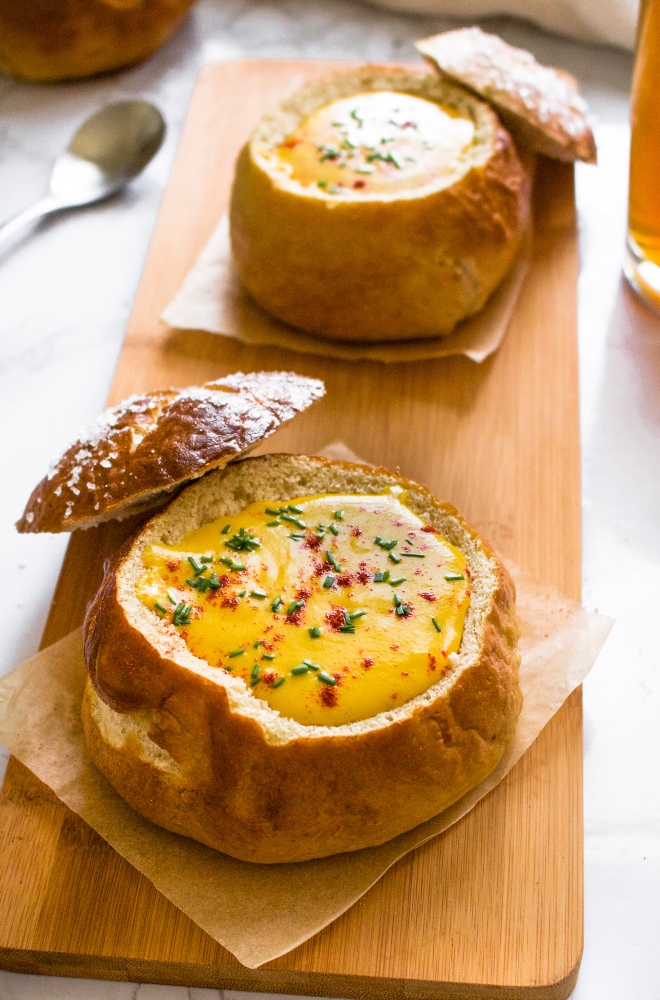 MAKE IT OIL-FREE: Cut out the olive oil and add ¼ cup raw cashews or sunflower seeds to the pot of boiling water with the veggies. This will require a high-powered blender like a Vitamix.

MAKE IT GLUTEN-FREE: Use a gluten-free beer and skip the pretzel buns!

NOTES ON BEER: A pilsner is a great place to start if you don’t want much of a beer taste; look for the brand Pilsner Urquell. Golden Lager or Hellesbock work best if you want a good beer taste that’s not overpowering. We suggest Hacker Pschorr Munich (or Munchner) Gold, Paulaner’s Munchner Lager, Paulaner’s Salvator, or Ayinger Dunkel for traditional German.

Pin this recipe for later: