It’s that time of year, you guys. It’s baseball season!

Did I just lose half of you there?

Well, stick by me because whether baseball is your all-time favorite sport (like it is mine 🙌🏻) or you’d rather watch paint dry, I have a feeling you’re going to love this list we’ve put together of all our favorite ballpark foods made VEGAN!

Because I think we can all agree – no matter how you feel about the sport – baseball food is always something to get excited about. And in this time of ever-growing vegan options, it’s also pretty exciting to see so many ballparks all over the country add more and more vegan foods to their menus. If you’re in Philly, I know that Citizens Bank Park even has dollar VEGAN hot dogs on Dollar Dog Night which is a pretty epic discovery if you ask me.

But still, I cannot speak for all stadiums and maybe you just want to enjoy some classic baseball food while watching the game from the comfort of your home and jammies (hi, we get each other 🙋🏻), it’s always super fun to have some kickass homemade versions on hand.

So, whether you’re gearing up to watch your favorite team or just want some killer classic comfort foods, pour yourself a cold one and get ready to be wow-ed by these 10 Classic Ballpark Recipes Made Vegan! 🍺 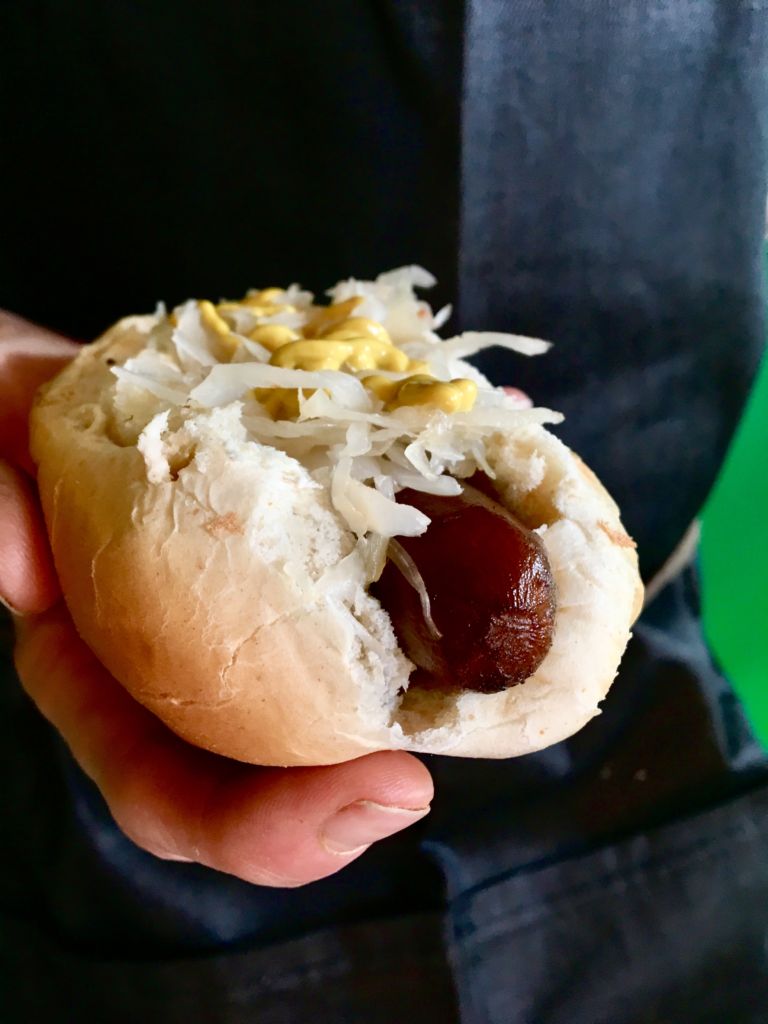 Let’s start strong here with what I would consider to be the quintessential baseball food: those classic ballpark dogs. 😍  I know it may sound weird, but this carrot dog recipe is the most awesomely spot-on vegan hot dog we’ve ever tasted. It seems crazy because tbh, I was never a fan of cooked carrots. Goopey logs of vegetable mush? No thanks. But these carrot dogs are different. They’re magic, and definitely something that needs to be tasted to be believed. 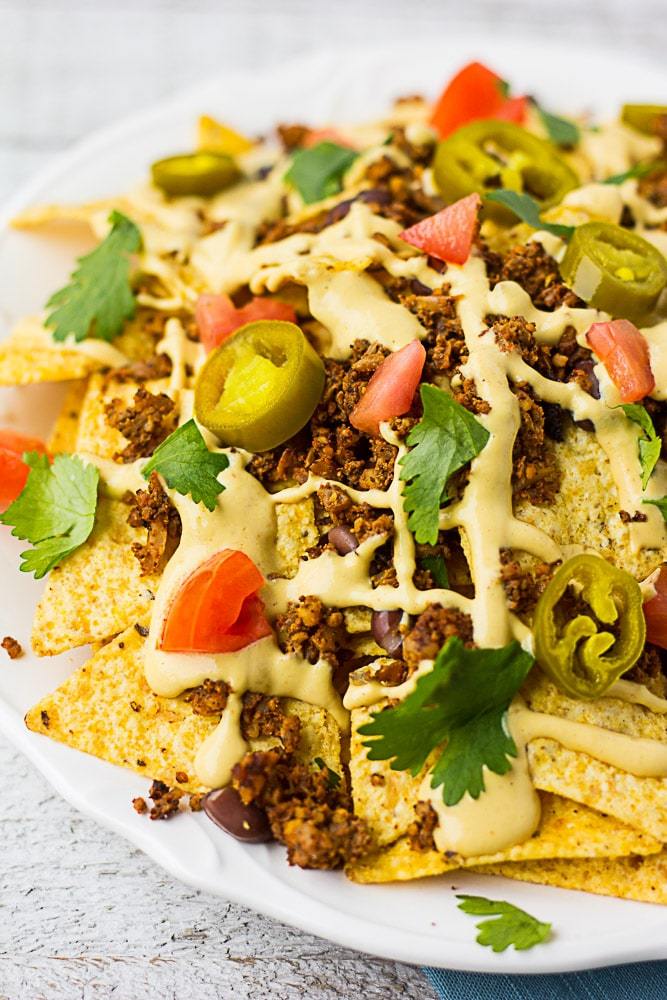 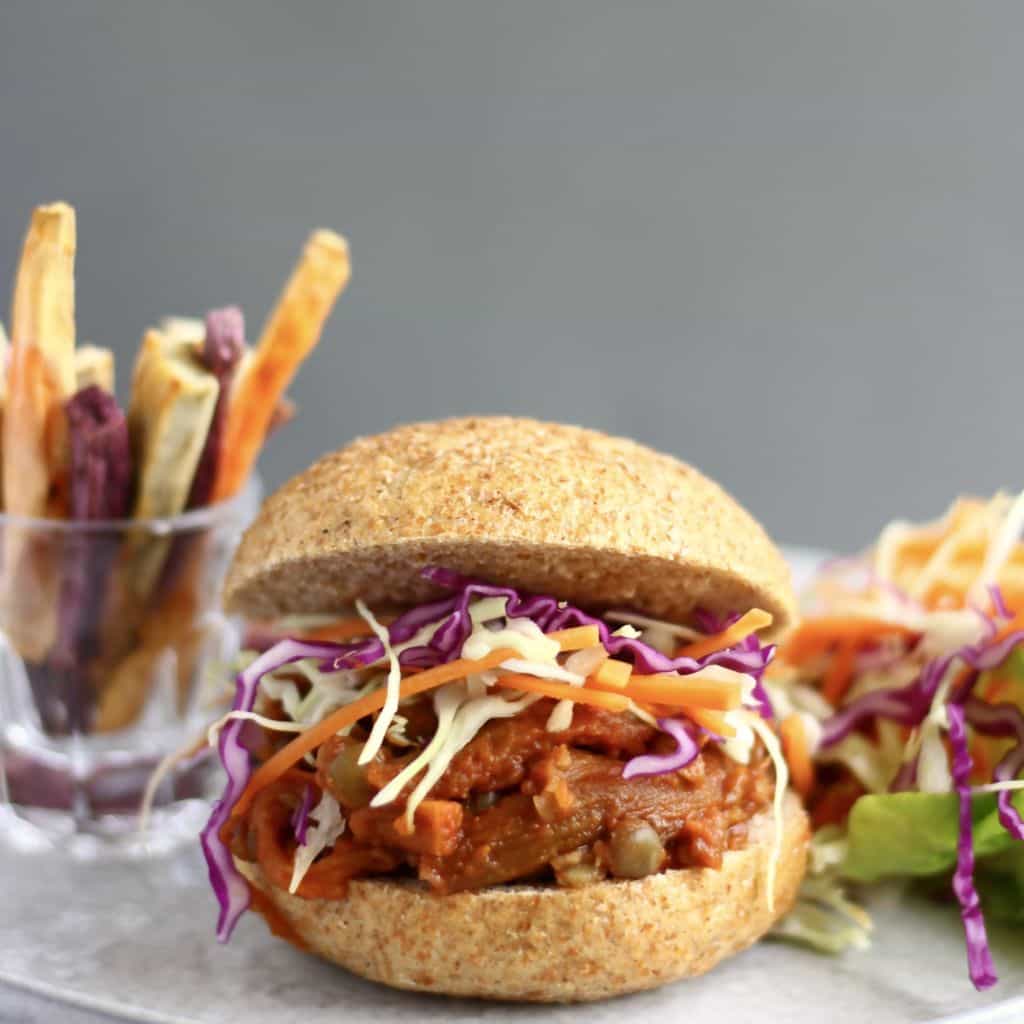 I’m sure we’ve all seen a lot of different vegan pulled pork recipes out there which is super exciting to me because this was one of my all-time favorite foods to get at baseball games growing up. But, this is the first time I’ve ever seen one using peeled eggplant. And I gotta say, I’m pretty intrigued! It looks so good, look how tender! 🙌🏻 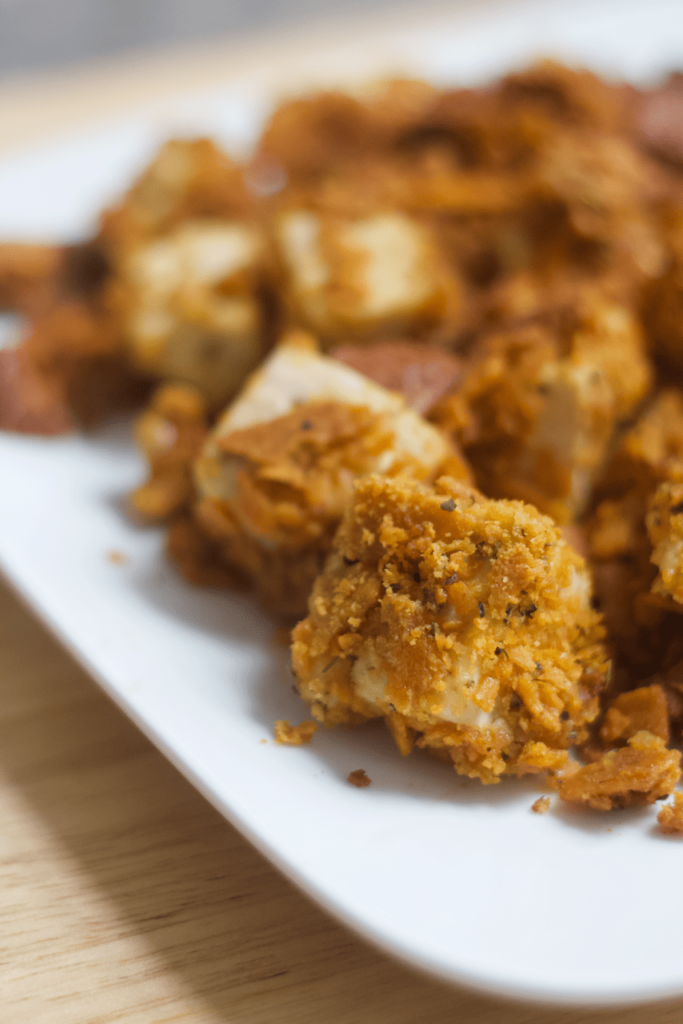 Nuggets! Oh, I surely ate my fair share of these bad boys at baseball games growing up – especially since it was one of the only foods on a very short list my brother and I would eat for the majority of our childhoods. That and penne with butter sauce, but that’s a different story for a different day. These Cheesy Tofu Nuggets by Healthy Helper look so tasty and easy to make! I could totally see myself snacking on a bowl of them while watching a game this season. 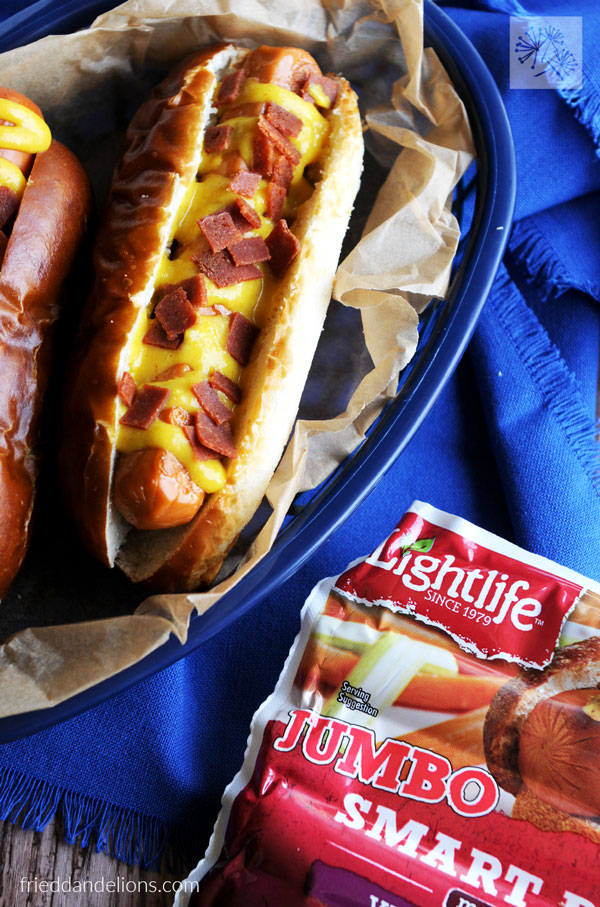 “Another hot dog recipe?!” you say. “Settle in”, I say. These are veganized Bacon Cheese Dogs! Fried Dandelions made this amaaazing vegan version of the classic using Lightlife vegan hot dogs and bacon, and it legit could not be easier to make. We are big fans of the Lightlife’s vegan products (like that bacon!), so we know this is going to be good! 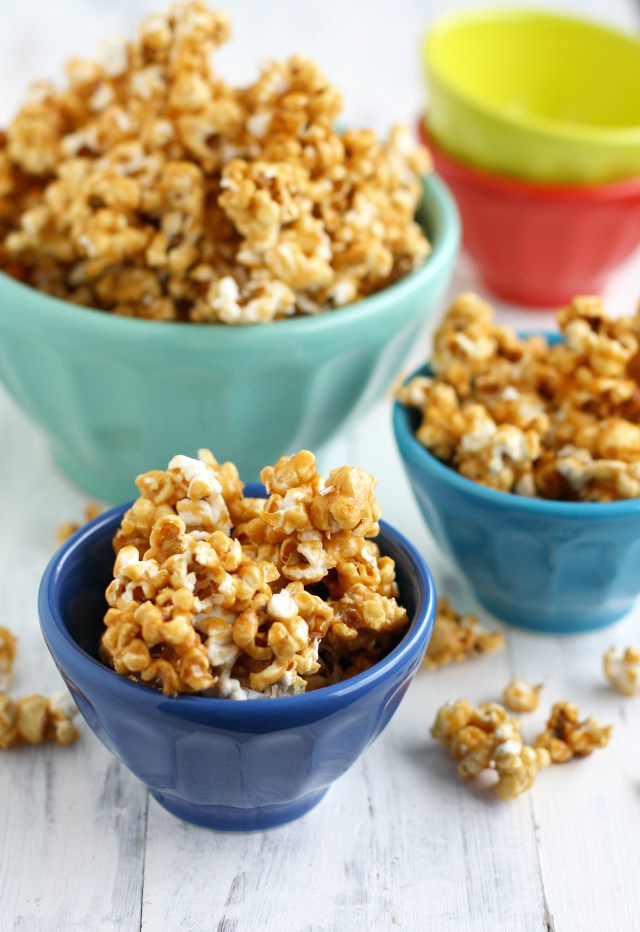 These are basically a vegan version of Cracker Jacks; I mean, could you get any more baseball classic than that?  😍 This recipe is also nut-free which makes it great for situations where allergies can be an issue, like children’s birthday parties which – coincidentally – sounds like an awesome reason to make this recipe! I could totally see it being a kid (and adult) favorite! / 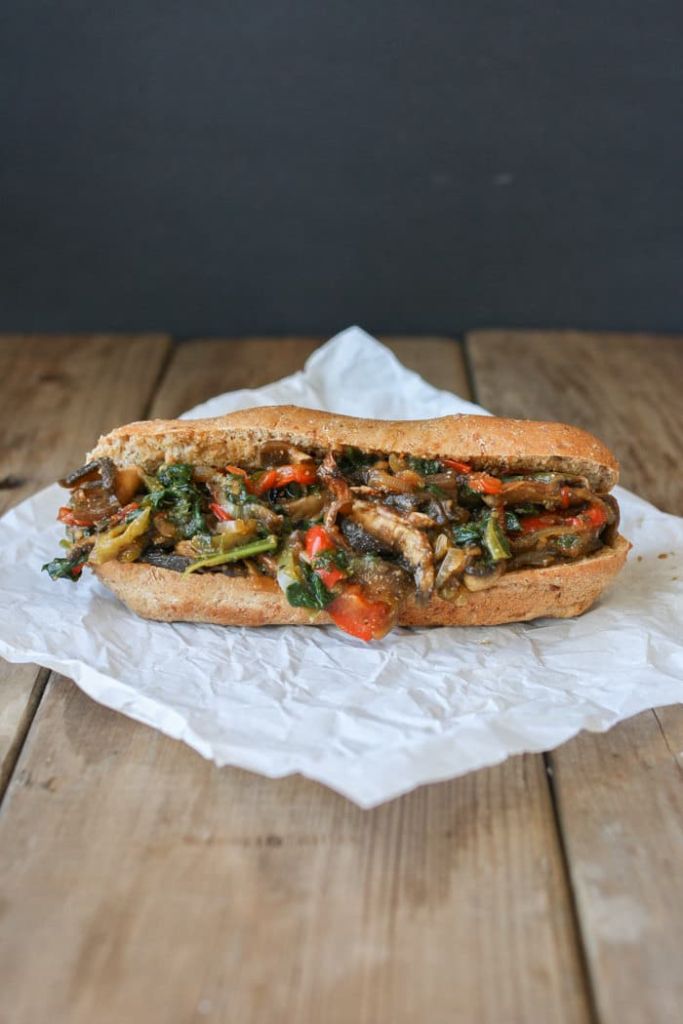 Being from Philly, steak sandwiches are a more-than-acceptable food for any occasion, so maybe my point of view here is a little skewed, but regardless, look how beautiful and meaty this Philly Portabello Steak Sandwich from Veggies Don’t Bite looks! 🎉 I love mushrooms, but T is still a little hesitant with them, so I usually save heavy mushroom-y recipes like this one for those times I’m cooking dinner for just myself. You can bet this beauty just made the list! I gotta try it! 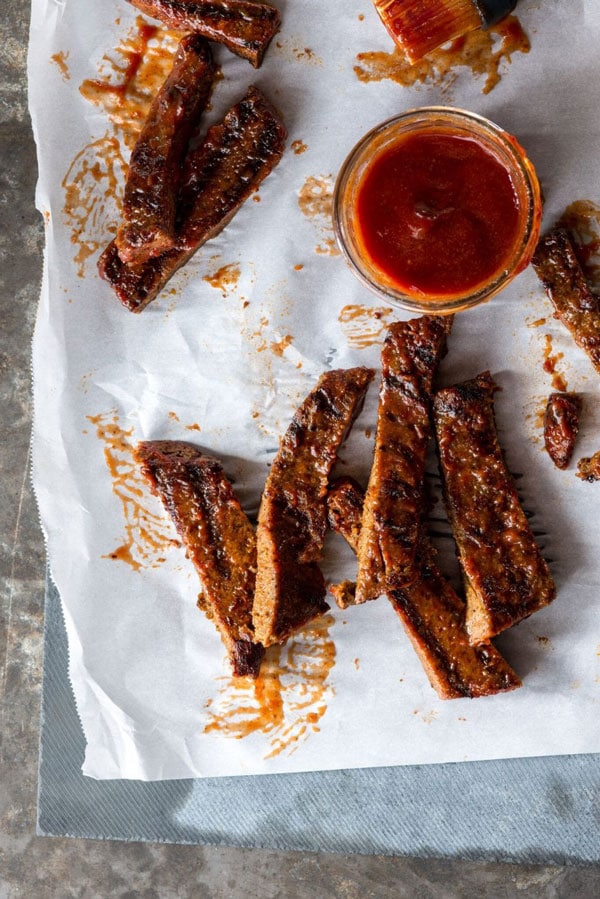 More BBQ! Does anyone else associate BBQ with baseball? I hope so, since I added two to this list! 😂 Either way, I’m super excited to try these vegan ribs from the always-awesome bloggers at Veganosity! It’s a recipe from their new BBQ-themed cookbook that I can’t look at for longer than 30 seconds without drooling uncontrollably. If you’re into this sorta thing (aka – amazing vegan bbq food), definitely give that a look while you’re on their site. 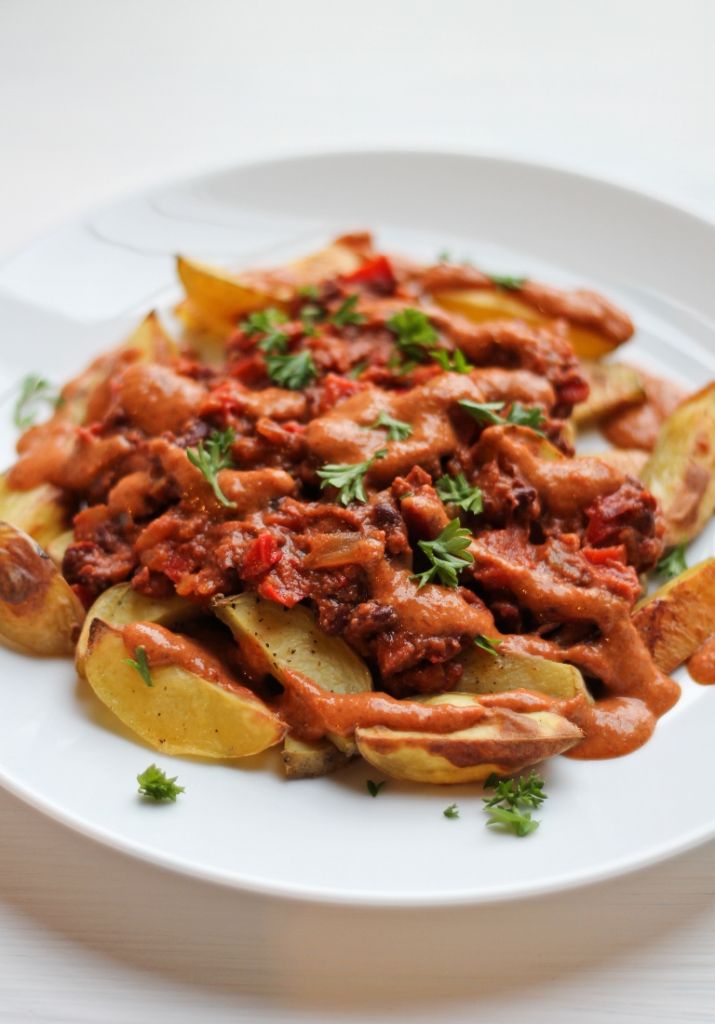 These are one of T’s all-time favorite foods. In fact, he’s been known to bring leftover chili to school and dump it over some freshly fried french fries for the ultimate workday lunch. Just perfection. This low-fat vegan version from The Vegan 8 is surprisingly easy and absolutely beautiful! I could totally dig settling into the couch watching a game with a big plate of these on my lap! 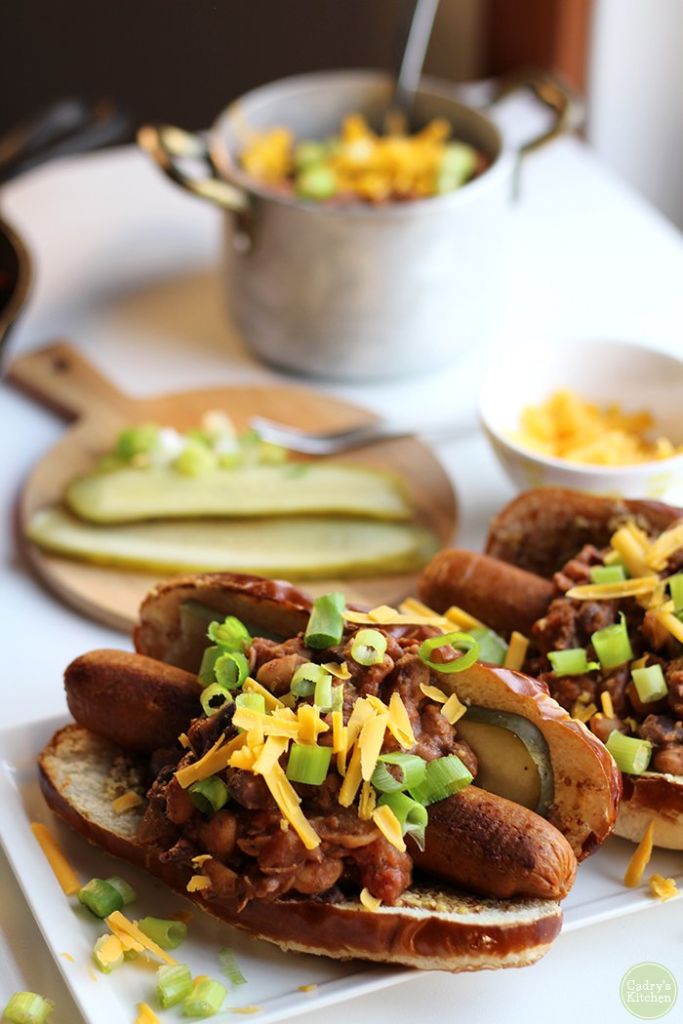 And last but certianly not least, ANOTHER HOT DOG! This chili dog recipe by Cadry’s Kitchen uses the Field Roast frankfurters which I’m told are amaaaaaazing. And looking at these photos, I can 100% believe it. We so need this in our lives!

So, there you have it: 10 Classic Ballpark Recipes Made Vegan.

The next time you’re having friends over for the game or just wanna have a relaxing night in and treat yourself to some killer comfort food, give these recipes a try!

I can’t wait to give every single one of these a go. When we do, we’ll be sure to document it on our IG Stories, so be sure you’re following us on there!

Until next time, friends! 🍻